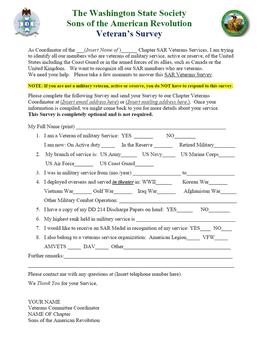 Material above and below contributed by: Bob O'Neal 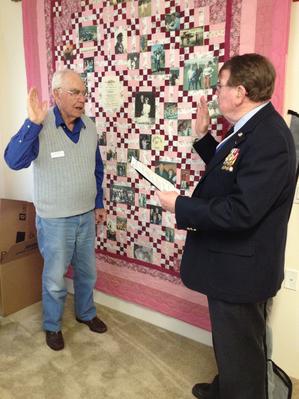 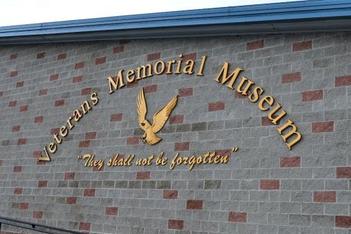 ​The Veterans Memorial Museum in Centralia, WA, is an outstanding museum that does much more than simply provide numerous interesting displays (including an amazing assortment of weapons).  Rather, it seeks to tell the story of the veterans in a very personal and intimate manner, thus helping visitors understand the hopes and fears of  those who fought and died for our country.

​   Darrell Holt (shown at right) was an active supporter of the museum.  He has since passed on, but his commitment to the museum lives on through the other members of the Alexander Hamilton chapter.

Every chapter should try to identify new members who are veterans with the Washington SAR Veteran Survey.  This Survey (tailored to the chapter) should be put into every new- member packet.

Chapter Veterans Coordinator should follow-up on each survey received by:

* Asking the veteran to see (not keep) his DD214 to verify which SAR medal/certificate he should receive: the War Medal or the Military Service Medal.
* Filling out the certificate and ordering the medal if the chapter can afford it (some give only a certificate and let the member order his own medal or medal set).
* Make sure the veteran is presented his certificate by the chapter president.
* Let the veteran know that he can also receive a SAR  "Certificate of Patriotism" (Veterans Corps) from the President General.

2.  Encourage members to donate their time, materials or money to local veterans facilities or groups.  Also mention that VA volunteers can receive the SAR Veterans Service Medal.   Some chapters, like John Paul Jones, have regular donations by chapter to a VA facility - The Retsil Veterans Center for example, and Alexander Hamilton Chapter makes donations to the Chehalis Veterans Memorial Museum.

3.  Report to the State Secretary the service of chapter members (branch, war service and retired rank.) so he can add this information to the database.​

​Mr. Charles Meacham (left)  was recently inducted into the Sons of the American Revolution at his home in Gig Harbor.  He is 90 years old, and a veteran of WWII.  He was a member of the Marine Raiders during the war.  In addition to receiving his member-certificate, Charles was also awarded the War Service Medal.

​Four of our 8 chapters have not yet appointed a Chapter Veterans Coordinator.

If your chapter does not have a Chapter Veterans Coordinator, please consider appointing a compatriot.  They will serve on the Washington SAR  Veterans Services Committee:

"This Committee coordinates and fosters support of veterans at the Chapter and State level."

Paramount to your duties is to see that every new member receives the Washington SAR Veterans Survey form (shown at right).  This form will help to identify, recognize and honor the service of these members with the appropriate SAR military certificate and/or medal.  Note:  The form can be modified for your use.