Chapter President Conrad Plyler, and his wife Candy, recently had the honor of presenting JROTC Bronze and Silver Outstanding Cadet Medals and Certificates to Cadet LCDR Kylee Reid of Port Angeles High School, Roughrider Company, NJROTC.  This was done at a meeting of the unit on a school day; hence no uniforms.  Kylee’s mother Tammie was in attendance, as was her Senior Naval Science Instructor, CAPT Jonathan Picker, USN (Ret.).

In addition to the awards from the Sons of the American Revolution, Cadet LCDR Reid was promoted to her rank straight from Cadet LT(j.g.), and took over at a Change of Command Ceremony that very day as the unit’s Commanding Officer for next year. 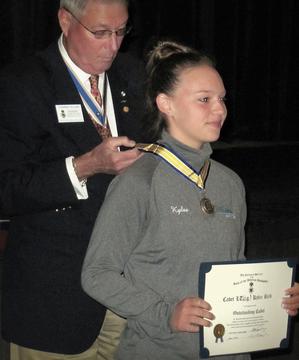 Cadet Reid’s winning essay and package was submitted to the National SAR review board on May 1st.   Matched against 20 entries from state societies nationwide, she placed fourth overall, an impressive performance.

A full list of Cadet Reid’s accomplishments could literally fill this entire newsletter.  In year 3 alone, she has served her unit as Platoon Commander, Color Guard Team Captain, Drill Team member and Squad Leader, and Administration Officer.  She has the potential to become Commanding Officer of the Unit next year.  Her resume is packed with academic Extra-curricular activities, including both JROTC activities and community service sponsored by the school.  She is an outstanding athlete in Fast-pitch Softball and Swimming, a State Finalist in both.  Activities in her church youth group and the North Olympic Health Clinic round out her impressive list of accomplishments.

Cadet Kylee Reid has certainly done her unit, her community, and Washington State proud by her dedication, commitment and superb record of accomplishments.  It has been a privilege for the Washington SAR to have worked with her in promoting this award to a  truly remarkable young woman. 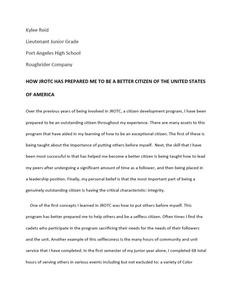