Note about Samoa:  The power-struggle in the Samoan Archipelago between the Germans, Americans, and British, resulted in the Tripartite Convention in Washington, D.C, on December 2nd 1899.  The Archipelago was split into a U.S territory and a German colony.  Apia became the capital city of German Samoa from 1900-1914.  What If: What if the hurricane had not blown in?  Would the U.S and Germany have become embroiled in a war? Could WWI have been avoided? 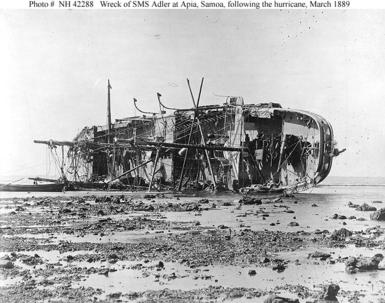 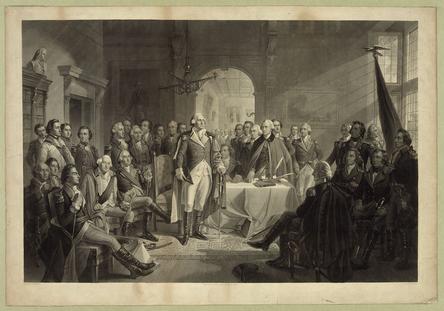 The National Society of the Sons of the American Revolution (NASSAR) officially organized at 9:00 AM on April 30th 1889.  The date was significant because it marked the 100th anniversary of George Washington’s inauguration as the first President of the United States. The room where they met was the “Long Room,” the same room where General Washington had assembled his officers  on December 4th 1783 to bid them farewell.

“The first social meeting of the SAR was held at Delmonico’s Restaurant in New York City on March 1, 1890, with 110 compatriots present from throughout the United States.”

“The first SAR National Congress was held in Louisville, KY, on April 30th, 1890.  A refined Constitution and other major issues were decided.  Membership required lineal descent from a Revolutionary Patriot.  At the end of the first year, the membership of the SAR was 2,500 in 28 Societies.  The first certificate, National Number 1, was assigned to William Osborne McDowell of the New Jersey Society.  Annual dues were set at 25 cents.”  (NASSAR Handbook, Volume vii, page 7, “Important Milestones in the History of the SAR”)

The men who created the “Sons of the American Revolution” lived in a world that was completely different from the way it had been 100 years earlier...​

In 1889, only 24 years after the Civil War, the country was still recovering.  Nonetheless, the engine of commerce was turning, business was booming, and the country was growing.  On January 15th, Coca Cola incorporated as the Pemberton Medicine Co., in Atlanta, GA.  One week later, Columbia Phonograph (later to become Columbia Records) was formed in Washington, D.C.  The following month, on February 22nd, President Grover Cleveland signed the Enabling Act, a Bill admitting North Dakota, South Dakota, Montana, and Washington as U.S states.  Washington would become the 42nd state on November 11th.

On March 4th 1889, the 22nd President of the United States, Grover Cleveland, completed his first term in office.  He would later become the only president to serve two non-consecutive terms.  His replacement was Benjamin Harrison, a man who had served in the Union Army both as a Colonel and Brevet Brigadier General, and who would later become a member of the SAR. During President Harrison’s tenure, federal spending reached $1 billion for the first time in our nation’s history.

Shortly after Harrison became president, the United States was again faced with the prospect of war. This time, the dispute arose in the far-off reaches of the South Pacific at a place called Apia Harbor.  It was here, in the principal harbor of Samoa, that a German warship shelled a village and inadvertently destroyed some American property.  As a result, three U.S warships entered the harbor in order to confront the Germans.  On March 15th, in a fabulous twist of fate, a hurricane blew over the island before any shots were even fired and destroyed all warships, both German (including the German warship, SMS Adler, shown in photo) and American. Without any ships, and with no other options available to them, the Germans and Americans declared an armistice.

At about this same time, on March 11th, the California Legislature voted to divide Los Angeles County in two.  The newly formed county was deceptively named Orange County (after the fruit) in order to attract immigrants.  The County would later become the 6th most populous one in the United States.  Tourism and entertainment would become a major part of its economy.  The opening scene of the Sit-Com, “Gilligan’s Island,” was filmed at the Newport Beach Marina, in Orange County. Other TV shows: “Laguna Beach” and “Wives of Orange County.”

After the American victory at Yorktown on October 19th 1781, the war officially dragged on until the Treaty of Paris was signed in September 1783.  In the interim, General Washington faced a dilemma:  The French had departed the continent and the American army was rapidly demobilizing, yet there still remained 26,000 British troops in New York City, Charlestown, and Savannah.  This meant that the Americans were essentially on their own for two years.  At any moment, the war could re-ignite into a military brawl.  Making matters worse, the American economy was in shambles by 1781, and the American government was financially broke.  In March 1783, restive officers who were unhappy with their pay rebelled.  Thankfully, General Washington intervened and the “Newburgh Conspiracy” fizzled out.

When the British finally evacuated from America and sailed away on November 25th 1783, General Washington was greatly relieved.  Finally, it seemed, he could get on with his life and return to Mt. Vernon.  Nine days after “Evacuation Day” he called his officers together at Fraunces Tavern, in lower Manhattan, to wish them all farewell.  It was a short, but emotional goodbye.

After leaving Fraunces Tavern, Washington began a solemn journey home.  First he went to Whitehall wharf, where he boarded a barge which took him to New Jersey.  From there, he proceeded until he arrived in Annapolis, Maryland, the meeting locale of the Continental Congress.  It was here, on December 23rd 1783, that General Washington stunned the aristocratic elites the world over by resigning his commission as Commander-in-Chief of the Continental Army.  Many had warily expected him to become a dictator, but they had seriously underestimated the General.  The final stop on Washington’s journey was Mt. Vernon.  As a private citizen, he was  looking forward to spending time with Martha, his wife, and enjoying a more leisurely lifestyle.

In the summer of 1787, however, Mr. Washington was once again called upon to serve the nation – this time as a Virginia delegate to the Constitutional Convention in Philadelphia.  Reluctantly, he answered the call and again put duty and country first.  Like many leaders of the day, including his protégé Alexander Hamilton, Washington was critical of the Articles of Confederation and was convinced of the need for a strong central government – and thus the need for a Constitution.  When he arrived in Philadelphia, he was unanimously elected president of the Convention.  His influence and high standing amongst the delegates, and Americans at large, played a significant role in the eventual adoption of the U.S Constituition.

Other Significant Dates in 1889

December 6th:  Jefferson Davis; President of the Confederate States of America; a man who tried unsuccessfully to destroy the Union so ingeniously crafted by our forefathers...A fitting end to the year.

General Washington is shown wishing his officers farewell in the "Long Room"  of Fraunces Tavern.

Note about Fraunces Tavern:  In 1852, two stories were added to the building after a devastating fire.  In 1975, the Tavern was bombed by Puerto Rican Nationalists.  Four people were killed and 50 injured.  Currently, the building is a National Historic landmark, museum, and restaurant. 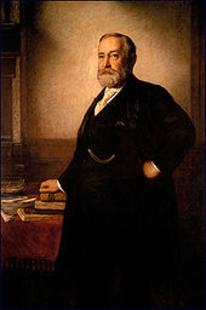