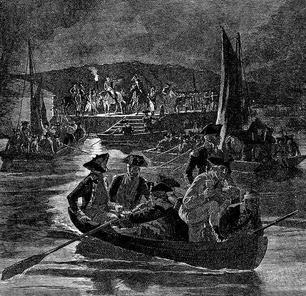 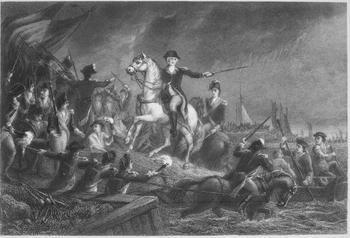 The Battle of Long Island took place on August 27th, 1776.  During the battle, the Americans suffered 300 soldiers killed, and approximately 1000 captured.(1)  Many of those who were captured were held on prison ships, where they eventually died from disease and starvation.  Were it not for the fortuitous fog, and the spectacular escape of Washington’s army across the East River on the night of August 29th and early morning hours of the 30th, the Revolutionary War would have likely ended in defeat for the Americans.

He watched the men work, but his thoughts were elsewhere. He remembered the heady day when these same men had gathered around him, cheering and shouting, as they listened to a reading of the Declaration of Independence.  At the time, they had felt invincible and full of confidence.  They had even torn down the wretched statue of King George III, and defiantly mounted the head on a spike.  They had built fortifications, gathered supplies, and done everything they could reasonably be expected to do.  And though every one of them, to a man, fully expected the British to put up a good fight, they remained hopeful.  After all, Bunker Hill was still a fresh memory in everyone’s mind.

It wasn’t long, however, before the ships began to arrive en-mass.  At first, there were only a few, their sails fluttering from the masts like bed-sheets on a clothes line. But as the days passed, and the ships kept arriving, the masts became a forest that filled the harbor.  Ships were everywhere, and so were the Redcoats.  It was then, during a restless night, when he had first become anxious.

In the darkness something spooked his horse. He instinctively tightened his grip on the reigns, and for a second or two his horse reared and stumbled.  When he regained control, he noticed a soldier limping along a few feet away.

Suddenly, another question loomed large in his mind: Will anyone ever remember the sacrifice of this man?  He turned the question over and over in his mind as he watched the soldier approach the water's edge.  And then, with fire in his eyes, he remembered the fateful words of his old friend, Patrick Henry.  He whispered to himself, “Liberty...or death!” and then sighed.  A moment later, he spurred his horse and rode into the night. 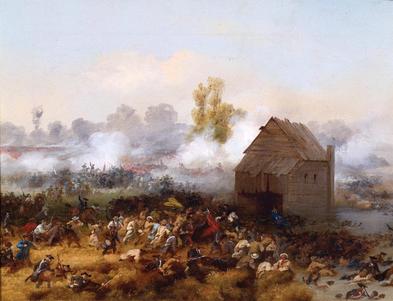 As usual, New Yorkers – young and old, black and white, rich and poor, men and women –  turned out in droves to celebrate America’s independence.  Together they gathered along the banks of the East River to watch the brilliant display of fireworks.  Many of them had arrived hours earlier to secure a spot of “real estate” where they could lay out a blanket or park a few lawn chairs.  The ones who had arrived late were satisfied to simply find enough room to stand.

When the sky finally darkened, there was a palpable feeling of anticipation.  The Air Force band began playing patriotic songs, and soon the words to “God Bless America” drifted across the water.  Suddenly, with a pop and a bang, the darkness disappeared in a blinding flash!  The startled spectators, almost in unison, gasped and cheered in amazement.

But then, a strange thing happened...

The thick fog that had been hugging the river all evening long, now drifted over the river’s banks.  Muffled moans could be heard in the now gloomy night.

General Washington listened to the moans of his wounded men.  How could this have happened?  Will they ever trust me again?  Is this where our dream finally ends?  His thoughts were briefly interrupted by the sound of artillery.  In the distance, on the right flank, several explosions lit up the night sky.  From afar, he thought, everything looks so...beautiful.  There were splashing sounds, and he turned again to look at the shadowy figures on the East River.  “Thank God for Glover and his men,” he whispered to himself.